The Ethics and Anti-Corruption Commission (EACC) has launched investigations into the continued absence of West Pokot Deputy Governor Dr Nicholas Atudonyang, who left the country for his base in Texas, United States where he practices medicine soon after last year’s elections.

EACC was on Tuesday grilling Governor John Lonyangapuo over why Atudonyang continues to draw a salary yet he has a full-time job in a foreign country.

“EACC quizzes Governor of West Pokot County over allegations that his Deputy Governor, Dr. Nicholas Atudonyang has a full-time job in a foreign country and yet continues to be salaried by the County Government for no services rendered. Investigations on the same ongoing,” it said on Twitter.

The move came days after university students from the county held a press conference in Nairobi where they lamented over the deterioration of health services thanks to the deputy governor’s continued absence. He doubles as the health executive.

Read: Youth Initiative Partners With Machakos Senator To Plant A Million Trees In Every County

They demanded investigations into his absence in line with provisions of Constitution’s Chapter Six on Leadership and Integrity and accused the Senate of failing to be seized of the matter despite receiving a petition about five months ago.

“Once he was inaugurated and assumed office, he left for United states to work there as a medical doctor and has not been serving the people of West Pokot,” Dennis Ruto from the University of Nairobi said.

“It is perturbing for us as university students to see that our deputy governor is not serving the people of West Pokot yet he is earning a salary,” he added.

Others who addressed the press were Hillary Chesoit (Jomo Kenyatta University of Agriculture and Technology) and Allan Rotich (Multimedia University). 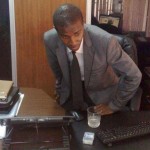 1 thought on “Governor Lonyangapuo Grilled Over Deputy’s US Job”